Projects in a region

As coverage increases, we will be able to complete more in-depth analysis across regions. 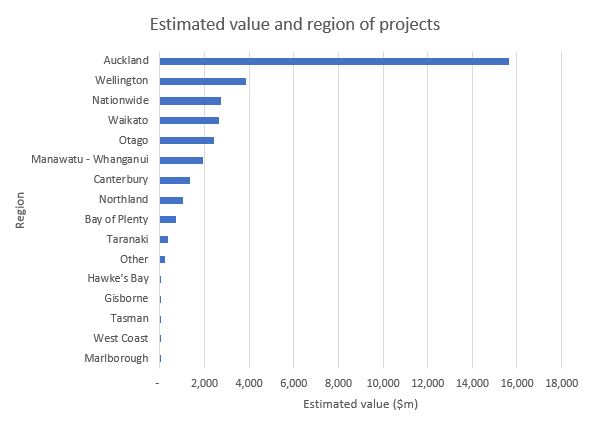 With the addition of Auckland Council, Ports of Auckland and projects from the New Zealand Upgrade Programme, there has been a significant increase in the estimated value of projects in the Auckland region. The region now has 1,874 projects and an estimated $15.6 billion in the pipeline. This is an increase of over $5 billion since iteration two was published in November.

Transport (NZTA) and water sectors (Watercare) are still the most significant contributors to the total estimated value of pipeline projects in the region. The largest projects in the region continue to be the Central Interceptor, City Centre to Mangere Light Rail and Auckland Metro Network Programme.

The Wellington region has also seen an increase in the estimated value of projects. Again, the New Zealand Upgrade Programme has been a significant contributor, with Melling Interchange and State Highway 1 Otaki to Levin improvements announced as part of the programme.

Also, of note is the addition of Wellington International Airport Limited, which includes the New Domestic and International Jet Terminal project.

Infracom, the New Zealand Defence Force and Palmerston North City Council have formed a partnership to develop a Manawatu Regional Pipeline. This initiative aims to increase coordination and collaboration between the main infrastructure asset owners in the region.

The first of four phases has now been completed, with the provision of project data for the pipeline. The data suggests that there is an estimated $2.5 billion of investment in the Manawatu region likely over the next 10 years. This does not include private investment.

The next phase of work will further develop the Manawatu Regional Pipeline with a focus on how to collaborate and improve planning and coordination. Infracom wants to explore the value in expanding the pipeline to include credibly proposed intentions (i.e. pre-business case phase) as well those that are ‘credible and committed’. It’s thought that that being able to see all the project intentions across the region could increase the opportunities arising from working together.